One of the most interesting aspects of working as a model maker is the variety of work that I undertake and the challenges that can produce. I was recently approached by the Sheffield office of international architectural practice BDP to refurbish a model of their original Sheffield offices located on Carver Street in the city centre. The project threw up several challenges that would not normally be present when making a new model.
The original model was created by now defunct Sheffield based architectural model making company David E Jane and can be dated back to at least 1991, if not before, when BDP was known as Building Design Partnership. Although expertly and neatly constructed, the model had fallen in to a level of disrepair and needed some care and attention to breathe new life in to it and to justify its pride of place in the new BDP office within 3 St Paul’s Place. 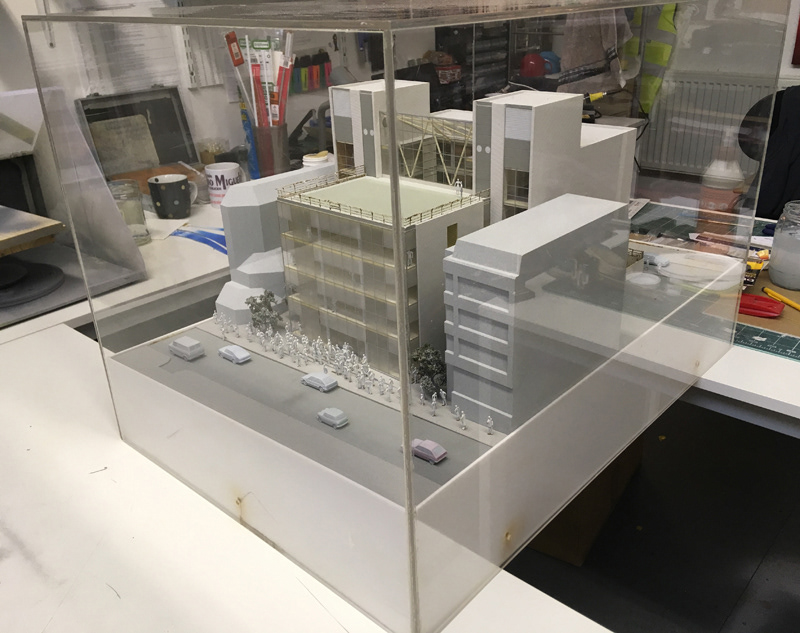 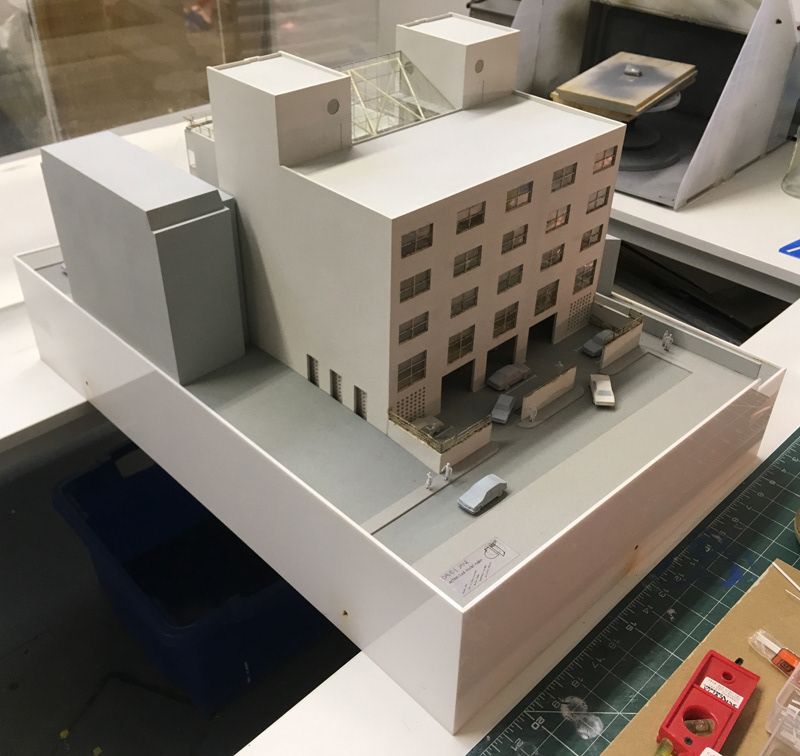 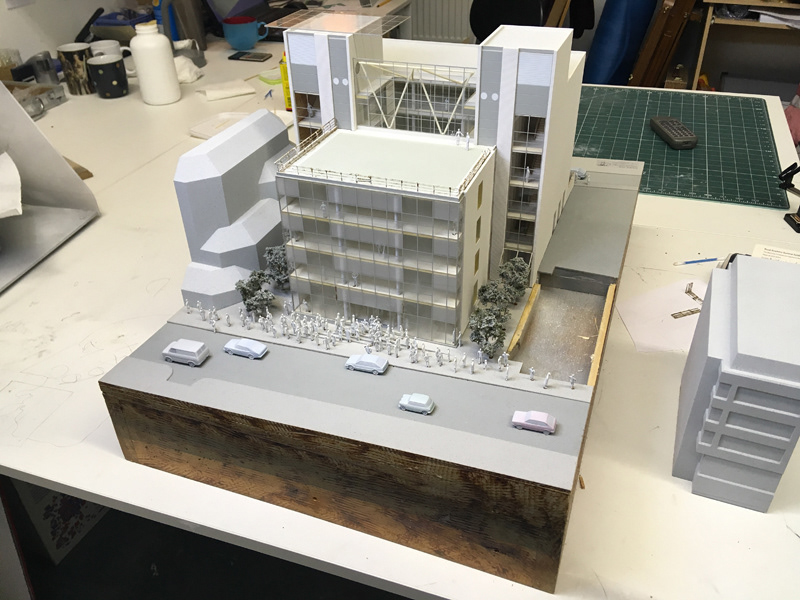 Firstly, the process of restoration began by removing and discarding the broken acrylic display case and white acrylic edge pieces which were split from the screws used to fix the case to the model. From there I investigated which elements of the model could be restored. Chief amongst the problems were the metal photo etched elements that had become rusted and brittle and required replacement. These included the rear window frames and mullions, wall railings and canopy structures. The glue used to fix these parts, as well as the figures, trees and cars had over time turned brown and stained areas of the model. Underneath the model, a single light was removed and the supporting plastic and transformer which had perished from the heat of the bulb. It was deemed too dangerous and destructive to tackle the deterioration to the interior of what had now become a very delicate model as this would result in remaking much of the model. Most of these issues cannot be easily seen and wouldn’t detract from the final result. 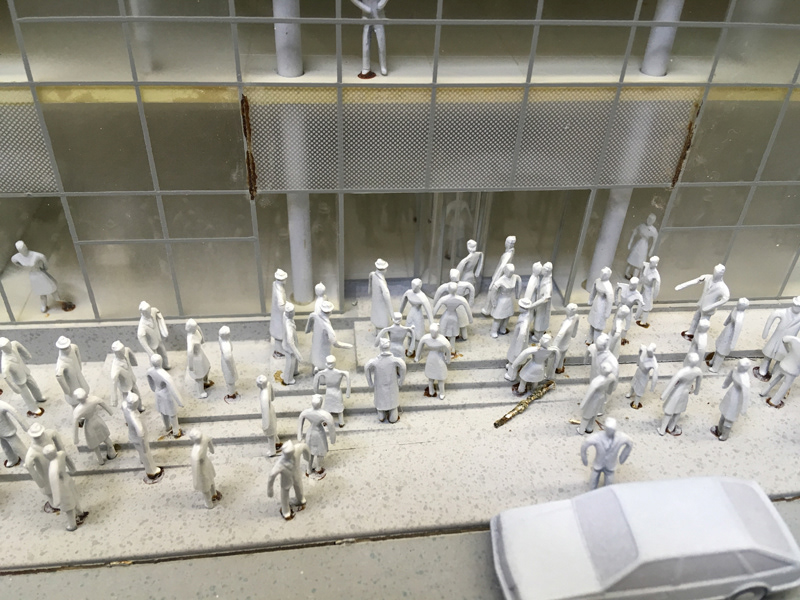 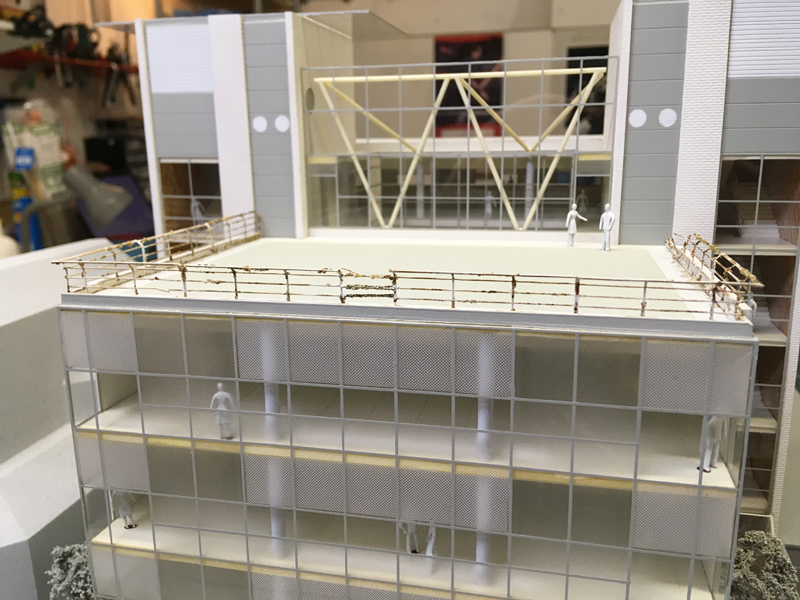 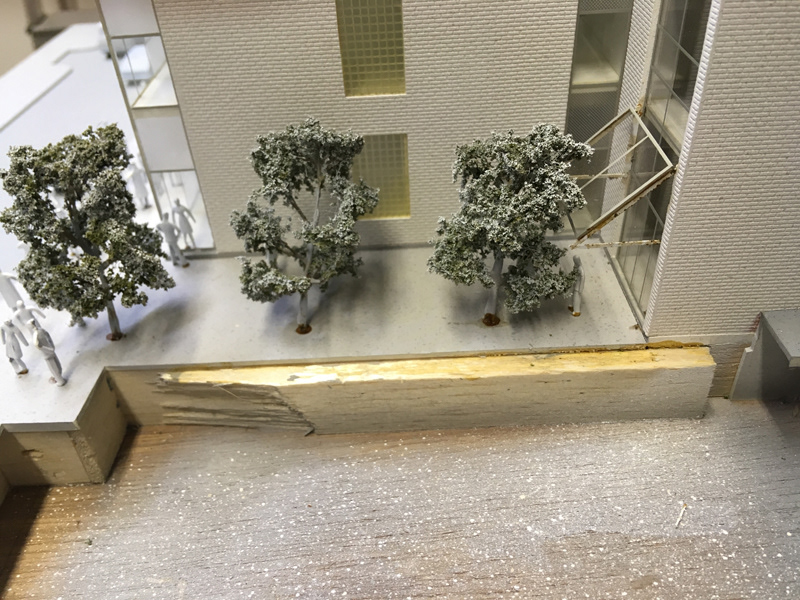 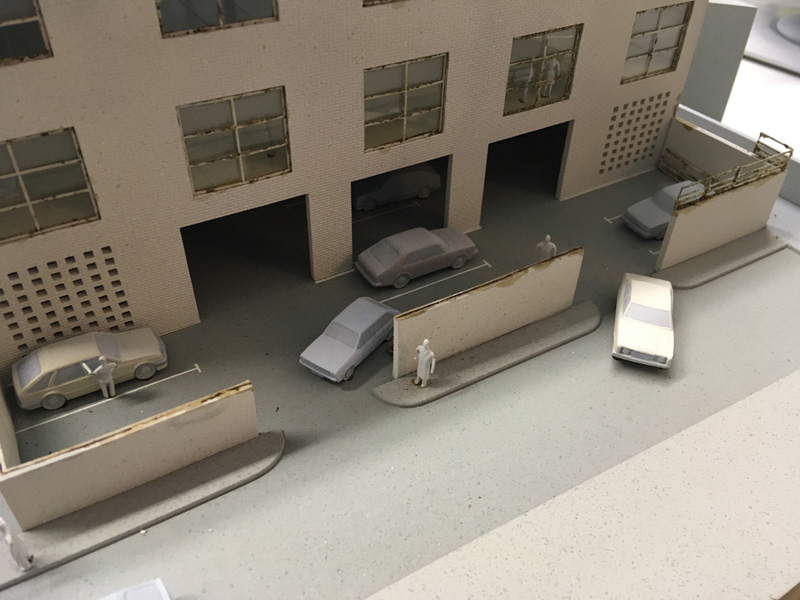 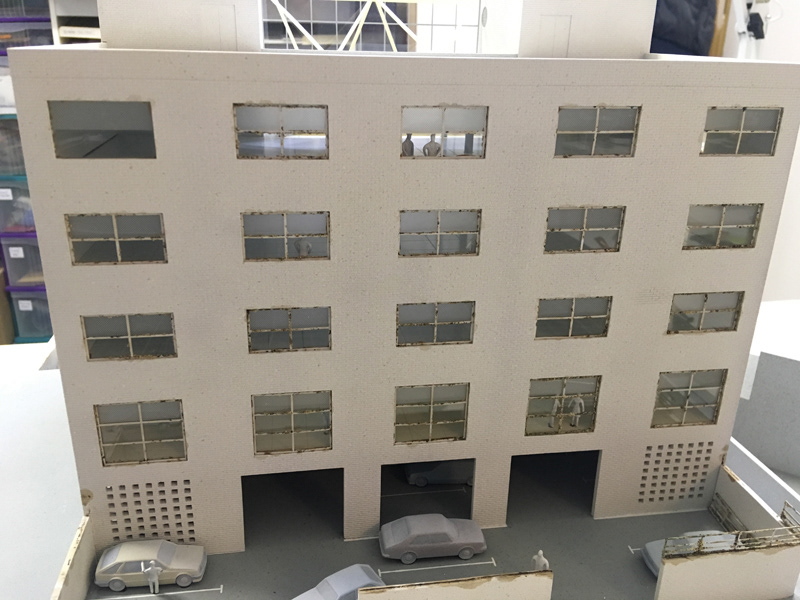 To gain access to the trees and canopies on one side of the model I removed the adjacent building. From there I was able to remove all the figures and trees, not without firstly recording their positions. All the rusted metal elements were removed and the entire glue residue scraped from the model. One of the trickiest aspects of restoring the model was colour matching the existing colours to hide the brown stains, a process that would if matched correctly negate the need to re-spray massive areas of the model. This was successful in all areas except the roof above the front projection which required masking and spraying around the perimeter. The cars were too delicate to remove for respraying.
All the figures and trees were sprayed white to revitalise their appearance, and finished with matt lacquer to hopefully increase their longevity. Re-fixing them was a pain staking process of matching the original positions from reference photographs.
CAD drawings were created for the rear window frames and mullions, wall railings and canopy structures and new brass etched parts made, sprayed white and fixed in place (once the surrounding areas had been cleaned and touched up), with a new plastic canopy made for the front entrance that had previously disappeared. 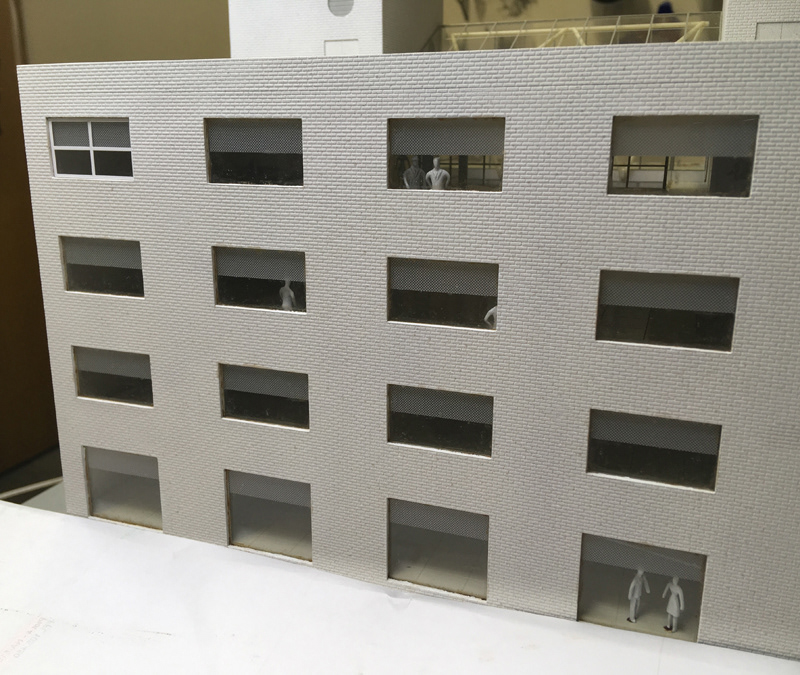 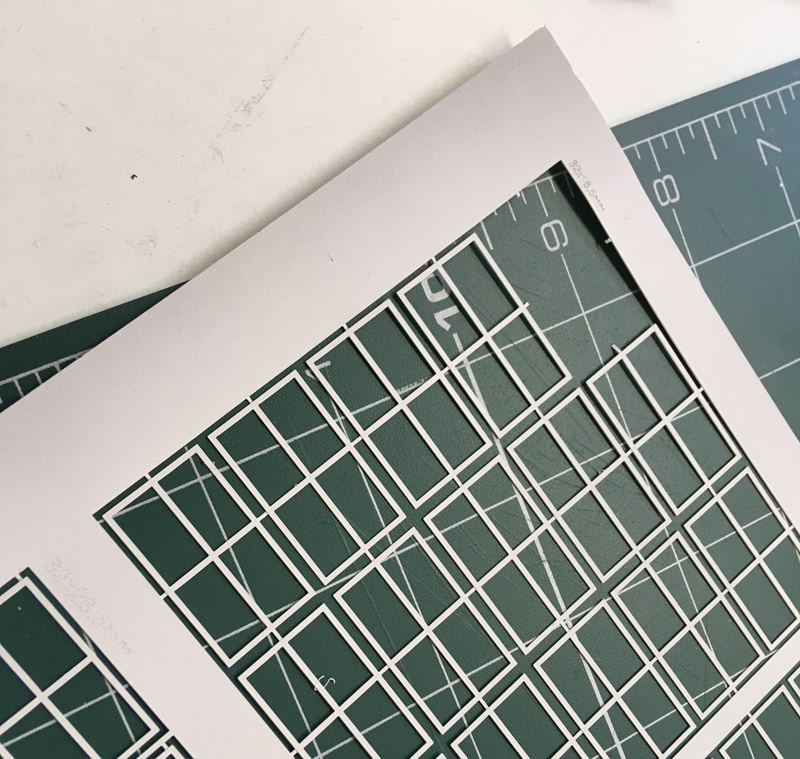 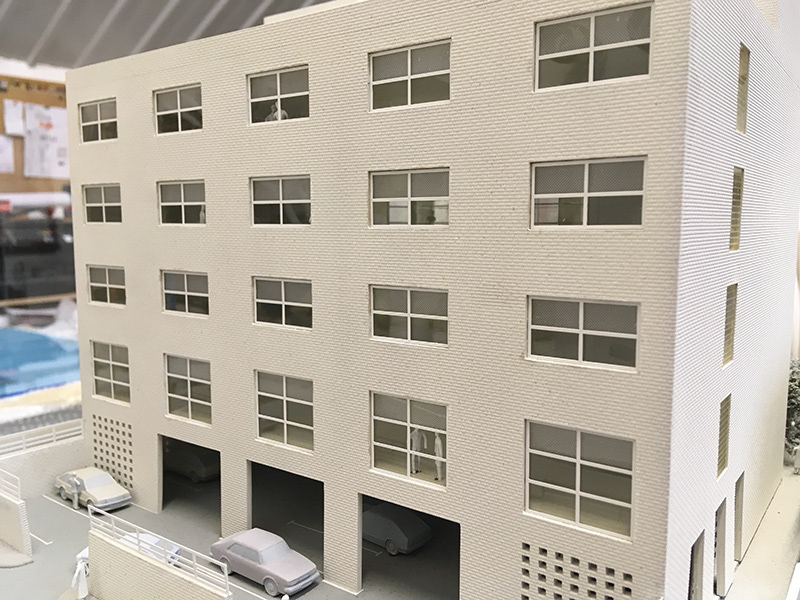 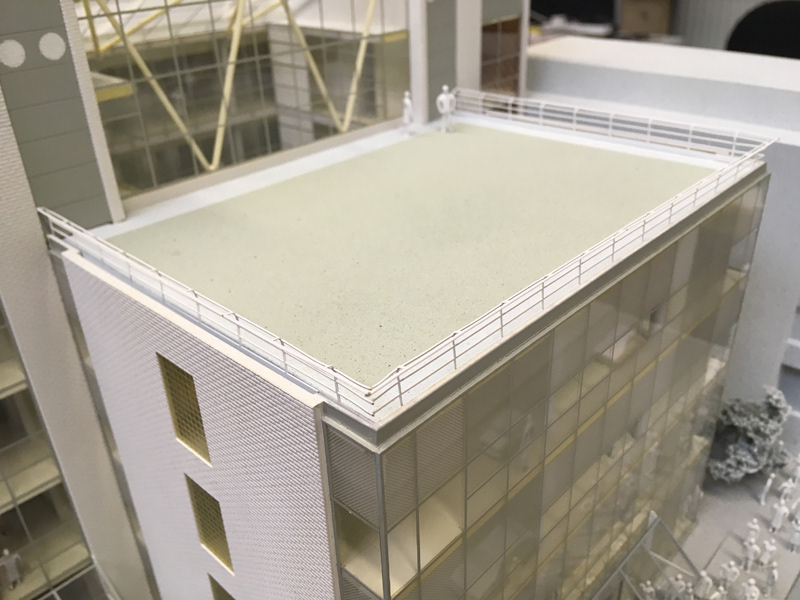 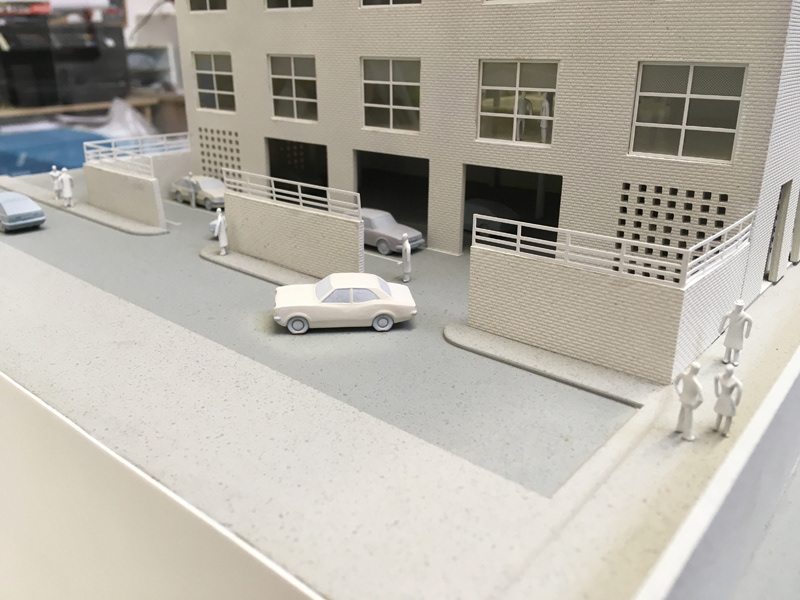 The sides of the model had once been hidden by thick Perspex, now removed. To bring this up to date with a modern clean look, the sides were sanded back, cleaned and filled to help square and level the frame, then clad with thin styrene. The joints were filled and the main model masked off as the edges were spray finished matt white. 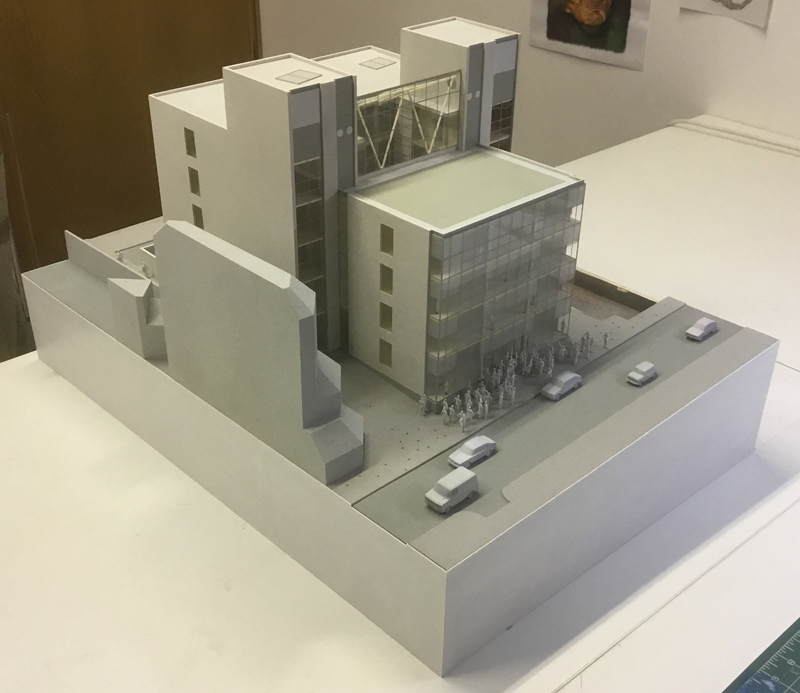 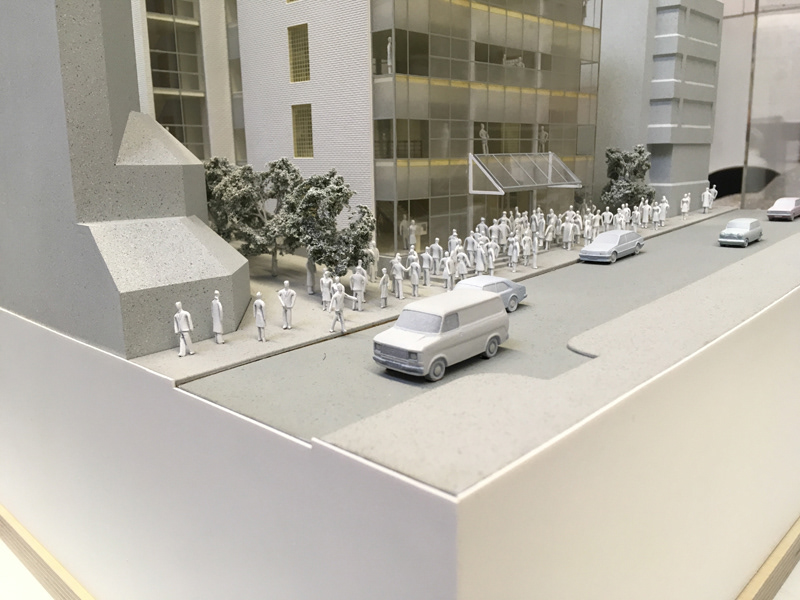 To complete the refurbishment, a new transparent acrylic case and a birch ply base have been produced. 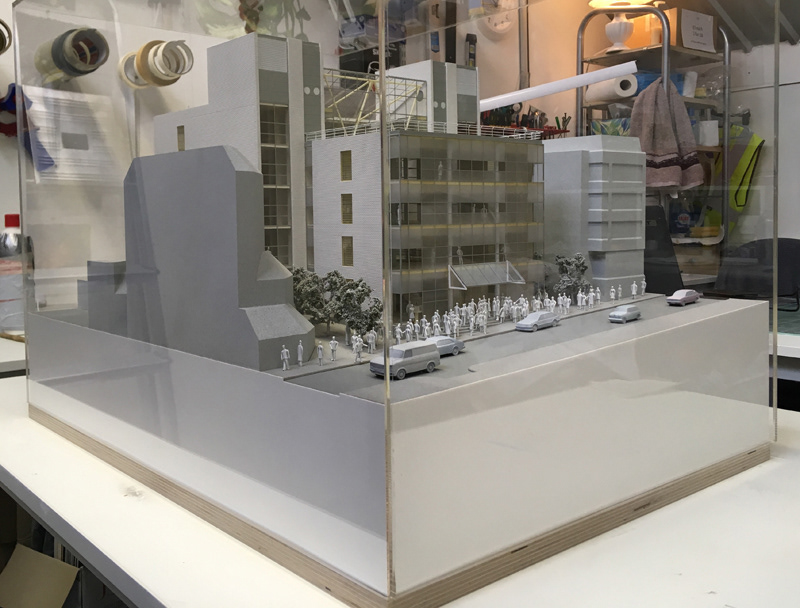 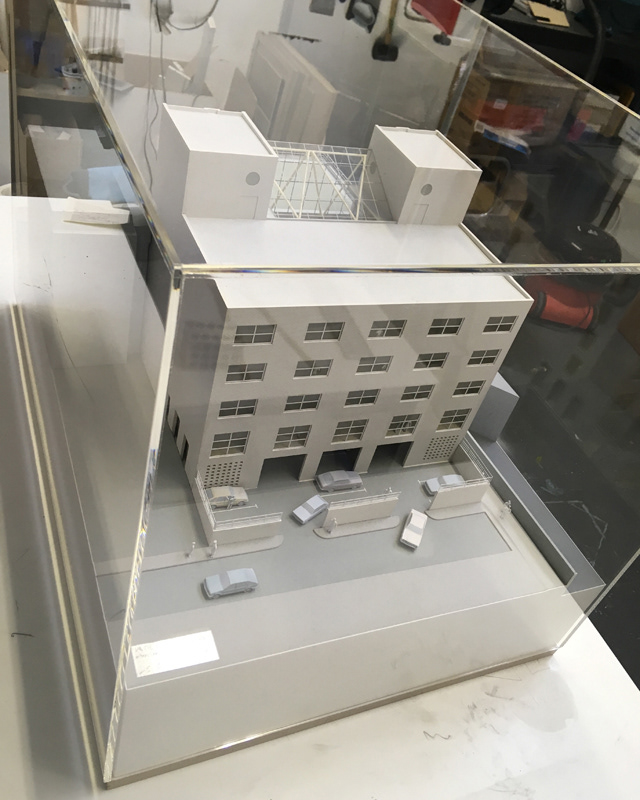 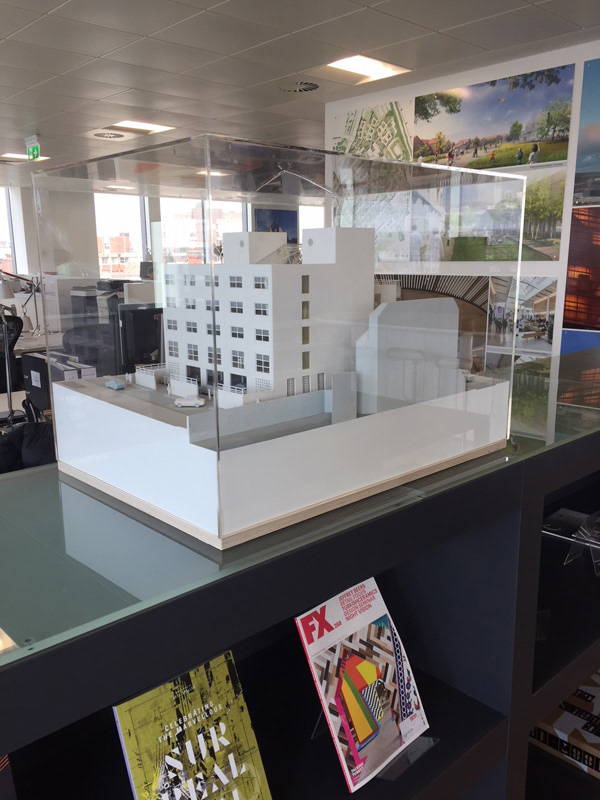 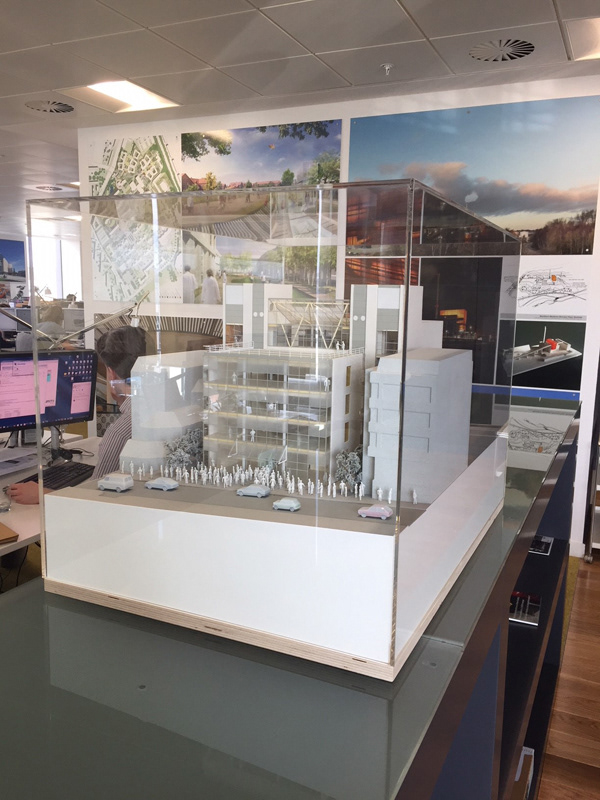 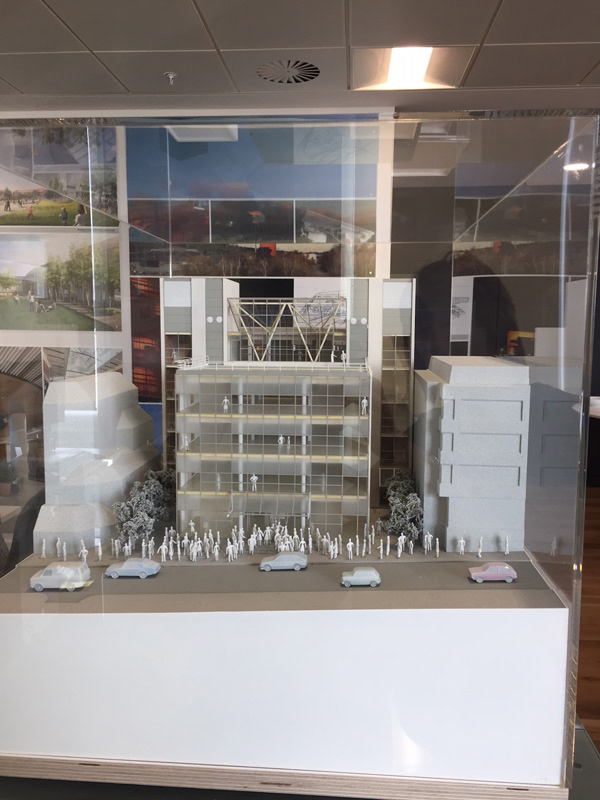